A ‘promotional vehicle’ can include cars, trucks, SUVs or bikes that promote a brand, business, product, or service. There are many creative ways to turn an ordinary vehicle into a promotional vehicle. Wrapping the vehicle with vinyl graphics is the most popular, and most ubiquitous.

Does car wrapping (or bus and van wrapping) work? Here is what the research says. See how this information can help you rev up business.

• 97% of people surveyed recalled an ad on a truck.
• 98% developed a positive image of the advertiser.
• 96% said vehicle graphics were more impactful than billboards. Now, that says a lot because billboards are very impactful.
• 29% said a purchase decision would be based on the promotional vehicle they saw (this finding is from the American Trucking Association).
• Another big benefit of car wrapping and especially promotional vehicles is their ability to reach a defined target audience when needed.

Nivea knew right where to reach their target audience – at the beach! Composite Images 3D printed this Nivea bottle and rode along the very popular Manly Beach in Sydney, Australia. The giant bottle attracted lots of sunbathers who came to get a free sample of Nivea’s sunscreen. 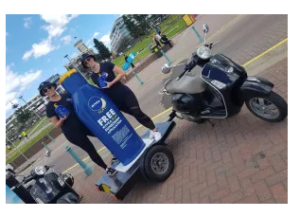 Sign Connection understood their target audience’s interests and knew just how to get their attention. They created this promotional vehicle featuring a shark and cruised around the Coca-Cola 600 over a holiday weekend in the United States.

The beauty of promotional vehicles made with Massivit 3D printing technology is the 3D message’s ability to stand out among the million other messages parading around. The average American is bombarded by 4000 – 10000 advertising messages every day. With no unoccupied space to advertise a message, how can a brand or business make their message stand out from the others? By adding 3D.

A professor at the University of Macedonia studied — and ran his own studies — on adding 3D elements to advertisements. The results were eye-opening: consumers paid significantly more attention to ads with 3D elements and consumers recalled an ad and the brand name in the ad with 3D elements without needing any cues (‘unaided recall’).

Let’s explore some extraordinary implementations of wrapping that added 3D.

Brooklyn’s Carisma Printing specialises in large format printing, and they continue to push the envelope on creativity. A few years ago, they raised the bar when they used Massivit 3D to add 3D parts to the buses they wrapped for a movie release.

Not only did these buses get attention on the roads across the USA, the buses excited the client, Sony Pictures, so much that Sony continued to use 3D bus wraps in many subsequent movie launches.

Print shops around the globe have used their Massivit 3D printers to deliver promotional vehicles that left their customers elated and pedestrians in awe. Sign Connection added a 3D-printed Superman to the roof to capture attention.

Dairy brand, Tnuva, drew attention to their yogurt breakfast drink with this oversized 3D-printed model of the product. Morning pedestrians flocked to try samples. This was 3D printed by ES Digital in Israel.

Riding with the Tour de France, this giant Senseo Coffee Maker 3D printed by Marie 3D got the attention of fans along the bike route as well as television viewers.

One year earlier, Metropole 3D printed this promotional display for key sponsor, Bostik, to ride with the racers on the Tour de France. These advertisements stand out and get attention – just what brands and businesses are looking to achieve.

Read the top 5 stories weekly on WhatsApp or sign up to our newsletter.